If you wish to end your marriage, multiple options in Washington may be available to you. Three of the most common options are divorce, legal separation, and annulment. All marriages can be ended with divorce, but not all can be annulled. Understanding annulment and whether it might be available in your situation can help you make the right choice for you and your family. If you wish to learn more about an annulment or divorce in Washington, contact Cohen Family Law, LLC for a free consultation.

What Is an Annulment And How Is it Different From Divorce?

A divorce recognizes that a marriage existed but terminates or dissolves the marital contract, effectively ending the marriage. An annulment, on the other hand, states that the marriage was never valid and therefore never actually existed in the first place. Rather than terminating a valid marital contract, an annulment says that the contract was invalid from the start.

After a divorce, an individual will be single but previously married, with a court order for how to divide community property and custody of shared children. After an annulment, however, an individual will go back to the status of never being married and may return to the same situation he or she was in before the false marriage. Like a divorce, however, the couple will still need to divide property and determine child custody, if applicable, when getting annulled.

The benefits of getting an annulment vs. divorce are generally related to the fact that an annulment legally erases a marriage rather than acknowledging that it existed. This could be important for religious reasons, for example, in a religion that does not allow divorce. It could also be important to you for personal or legal reasons. 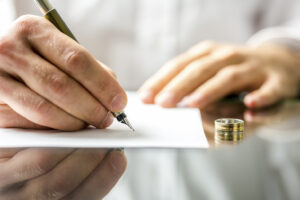 What Are the Requirements for Getting an Annulment in Washington?

Annulment and divorce are not only different on a technical level; they also come with very different legal processes in Washington. Washington is a no-fault divorce state. This means that the only grounds for which you can seek a divorce are irreconcilable differences or an irretrievably broken marriage. In other words, you do not need to cite a specific reason for the divorce, such as adultery.

To get an annulment, however, you must show acceptable grounds for this legal remedy. In Washington, getting an annulment is only possible if you can prove one of the following legal grounds:

The decision to file for an annulment rather than divorce or legal separation is an important one, as it can determine your legal status as a single person in the future. Determining if you have grounds for an annulment in Washington is the first step toward having the courts erase your marriage from a legal standpoint.

Learn More by Speaking to an Annulment Attorney in Washington Today

If you have grounds to have your marriage annulled in Washington, a family law attorney can help you complete and submit the required paperwork and proof to have the courts finalize the annulment. A lawyer will answer your questions and guide you through the legal process while protecting your rights as an individual who was forced, tricked or otherwise involved in an invalid marriage. For more information about an annulment vs. divorce in Washington, call (360) 953-5000 to speak to an attorney at Cohen Family Law, LLC.